Losing sight is terrible all over the world, but incomparable in the Third World. If a parent goes blind, it is almost impossible to care for the family and all too often the death of one of the children is the immediate consequence.

Since 2012, we have been committed to the “Eyelight” project, which is one of the most important prerequisites for self-sufficiency, security and education. An annual eye screening carried out during the trips on site detects sea-weaknesses and diseases. If the examination reveals the necessity of an eye surgery, we finance it. The people in the regions in which we operate usually do not know that they have a curable eye disease.

In Cambodia, it is usually cataract that sets in very early because of the high UV radiation and dust exposure. In addition, infants suffer from illnesses such as “the hanging song” or “the proliferating skin”, both of which lead to complete blindness even at an early age. A future for this child is out of the question. Even though the operations themselves are free of charge, food, transport, sunglasses and follow-up examinations add up to about 60 euros and are completely unaffordable for these people. 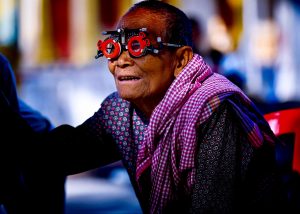 How can I help?

Become a sponsor of one of our projects.
BECOME A SPONSOR