There’s an “old lady” outside a village. Although she is only 61 years old, she is much older due to her life story. She is a kind of personal “friend” of mine. At the beginning of this year I made sure that SC finally gave her her new house. She works so hard for it, really unimaginable this woman. Now her reputation in the town behind has also increased considerably. Through the contact with me and Kerstin February she is now recognized and is no longer regarded as the “strange old woman in front of the village”. Of course I visited her. She has changed and told me that she suffers from unimaginable headaches.

Here is her story again: At the time of the Khmer Rouge she was a young woman. She had to line up in a row, a row in front of a mass grave. After she had watched all important people to her, mother, father, siblings, neighbours and friends being beaten to death one by one, it was her turn. She was the last one that afternoon. The man who smashed people’s skulls in the front had become tired (her own words) and had not hit her on the head firmly enough with his club. So, she fell into the mass grave, but was not dead. So, that no one inadvertently survived in the grave, another very poisonous chemical was scattered over the bodies, she was also spared from it. In the night she came to and was able to crawl out of the pit. So much for that. Since then she has been living alone in front of the village as the “strange old woman”.

It is “my” first project and after the story I put her on my moped and drove her to the small provincial town of Pursat. It must be possible to help her.

First of all, I look for and find the only doctor with X-ray facilities. I have her skull x-rayed and my blood checked. Fortunately, it turns out that the skull is o.k. and we know which medicines would improve the blood composition. Above all, the constant fear that she has a broken skull is gone.

Since the headache fortunately doesn’t come from a smashed skull, I think, what else could it be. Sure, she probably can’t see very well and her eyes are so constantly overstrained. I have her eyes examined without further ado and take care of unbreakable glasses. For the first time in twenty years she can see properly and the constant headaches are gone, at -6.1 dioptres really no wonder. Now there is only a little mobility missing and the old lady can bring her vegetables on the market and make her own living. Thought, done, a bike for $ 50,- and off we go into the future.

Then a small technical change in the hut. A battery and two 12 Volt lamps are quickly bought, now she has light in her hut and cooks soup against payment. You can eat it still after dark in front of your hut, on the floor, but still.

Result: The lady has a life again, is accepted and no longer starves. She provides for herself and is an ingenious role model for all villagers.

The first mission is clear: to visit and evaluate some of last year’s projects that have all taken place here around Pursat. We want to learn which actions have which effect in the long run. On their way out of the total disaster we want to accompany one or the other family. So first we visit our “oldest” project: my “old lady” in front of Monk Village. She kept her status and when we arrived she worked hard on her second small pond, right in front of the hut. Our commitment over the last year has been fully effective. She is diligent and in a good mood. Our battery from last year seems to have stopped working, a new one is needed. Endru has a good idea.

He saw a small solar panel with lamp and radio on our outward journey. The thing would bring 2-3 hours of light and entertainment in the evening, without the annoying and expensive charging procedures.

The evening business in front of the hut can start again, the old lady cooks soup for passing people from the vegetables of her new garden and the fish from her new little pond. Traditionally the people like to sit on the table in front of the hut, which we will get as well. Once a week a car drives through the city, where such things are offered cheaply. Mr. Siep, our project 7, will wait for this car and the old lady will get this table and set it up. Her biggest problem, however, are the cows and water buffalos running freely everywhere. A single cow eats all the vegetables in one go. Once not paid attention – huge problem. So, we decided we’d get a simple fence.

Here, too, Mr. Siep must continue to accompany the project after our departure. We still buy all the necessary material, but he has to organize the assembly. He is proud to be able to help us.

Conclusion: All in all, our old lady is still on her good way, which we brought her to in December 2008. With the small help this year, a little medicine and the promise that we will look after her again next year, she will continue on her way. Awesome!

Hey, here we are again. Our first project, my old lady. What happened to the “crazy old lady” in front of the village at the time when we look after her once a year (since 2007!) ? She is still old and that won’t get any better, but she is happy, has confidence and is an absolute self-caterer.

Of course, the hut is unimaginably spartan and simple by our standards, but for a Khmer woman who was allegedly slain by the red Khmer, woke up on her dead family, escaped and now lives alone with this past, her life is now worth living and good.

We’ll see what’s come up. She is busy selling things that grow in her small garden and keeps her two small fishponds in order.

The battery we gave her last year has unfortunately been stolen, so we like to buy a new one. We should also help with the rear part of the roof, otherwise the next rainy season should be a real problem. A few nails and a new lamp socket for the only light in the sparse hut, improve the situation again considerably.

Basically, we don’t leave cash with any family, but with our Old Lady we make an exception. We give her $ 50,- in cash. She can and will decide for herself what she spends this money on.

Conclusion: The years of help were no wrong decision. It is very “fertile soil” and a great role model for the surrounding families.

Fundriding Tour February 2017. The tour leads us automatically past Pursat and inevitably past my old lady. There is hardly a visit in Pursat where I don’t check up on my Old Lady. Since time is short and we are on our way to the Kardamon Mountains, I take the whole group with me. Having arrived there, we find her with a dislocated shoulder. Two months ago she fell from her self-made ladder while picking mangos. Unfortunately, the incident is too far back as that we could correct her shoulder.

I convince her to travel to Battambang. She urgently needs surgery to get her shoulder back in working order. Bong, David and one of their employees personally take care of her physical well-being, both during her stay in the hospital and afterwards during her rehabilitation. She is staying for two months in our headquarters in Banan – free of charge, of course. At this point, a big thank you to our partner organisation Bareebo.

The costs for any transport and meals during the three months will of course be covered by us.

The next Fundriding Tour is coming – unfortunately this time without me. Due to an emergency operation I have to stay at home with a heavy heart. Naturally, I will send our colleague Nadine Urbansky to see my old lady. She tells me that the Old Lady repeatedly fell from the ladder. This time she injured her foot. This injury affects her movement so much that she cannot afford a visit to the doctor. Nadine immediately sends her to the hospital for X-rays and leaves her cash so that she can buy food and pay someone to bring it to her. The x-rays show a smooth fracture which has already healed.

At the beginning of January I set off for Cambodia. One of my first official acts is of course the way to the Old Lady. In a good mood and in deep solidarity she hugs me when I arrive. The doctor prescribed her dietary supplement to strengthen the bones, which show their effect. She regains her strength and slowly begins to load her foot again. We get her a new pair of glasses, a new food supplement and promise her a support of 35,- € per month. We are already looking forward to December – our next visit. 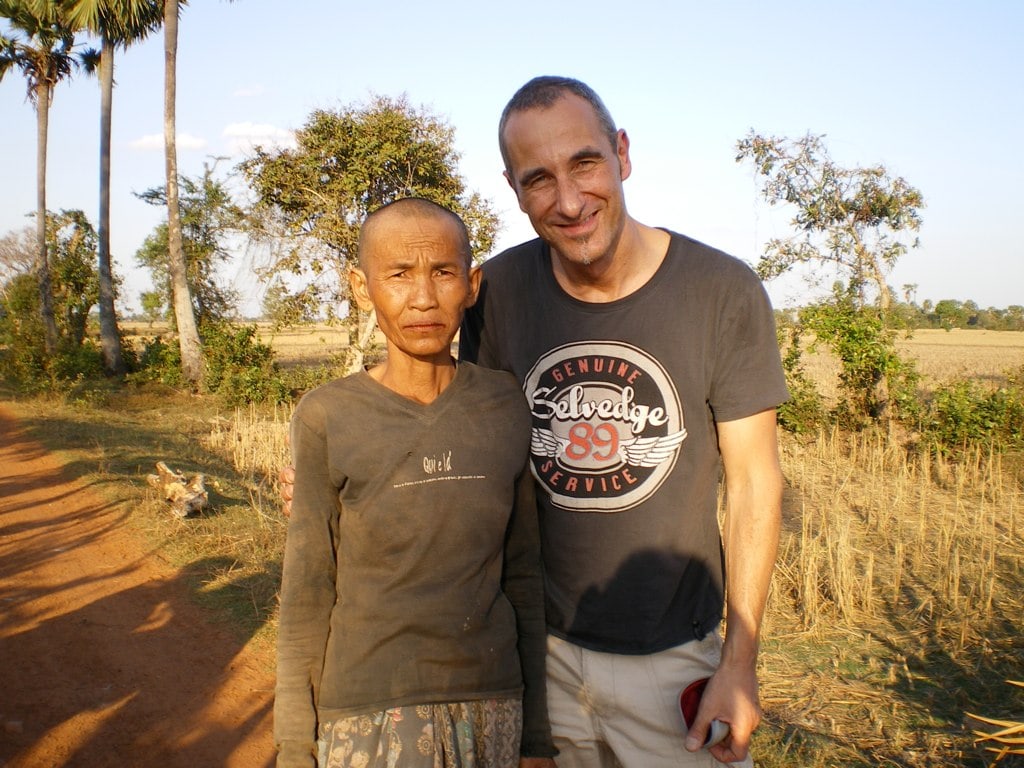 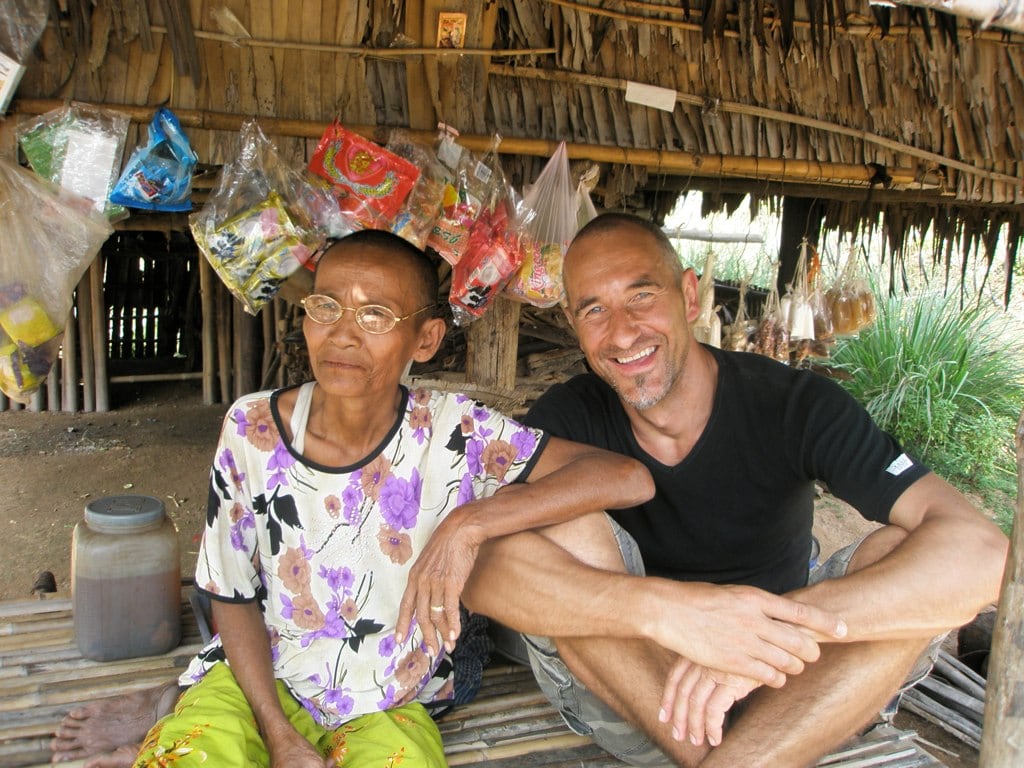 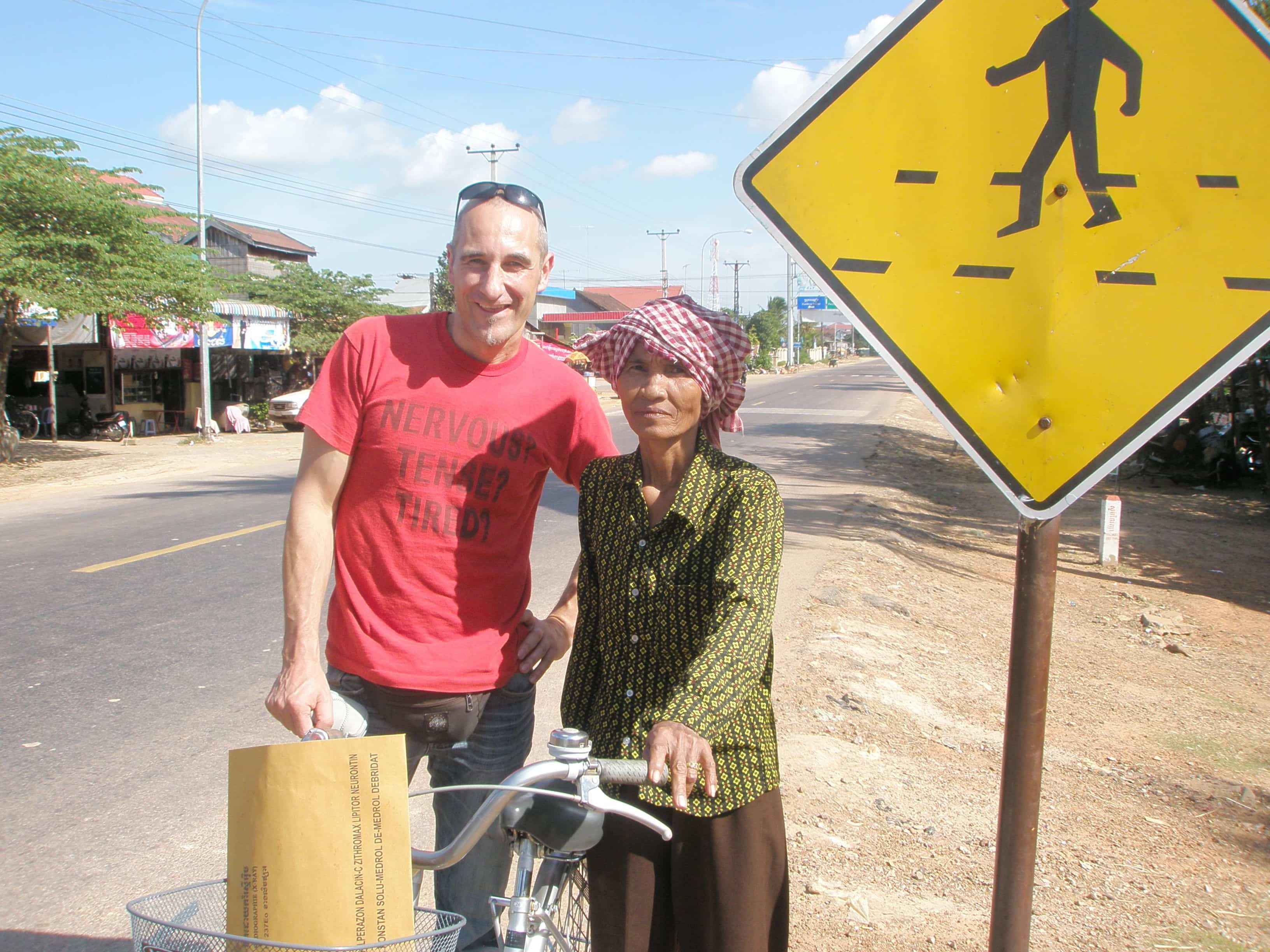 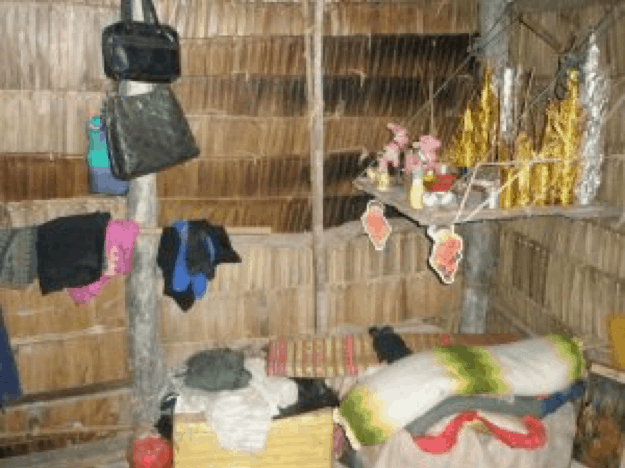 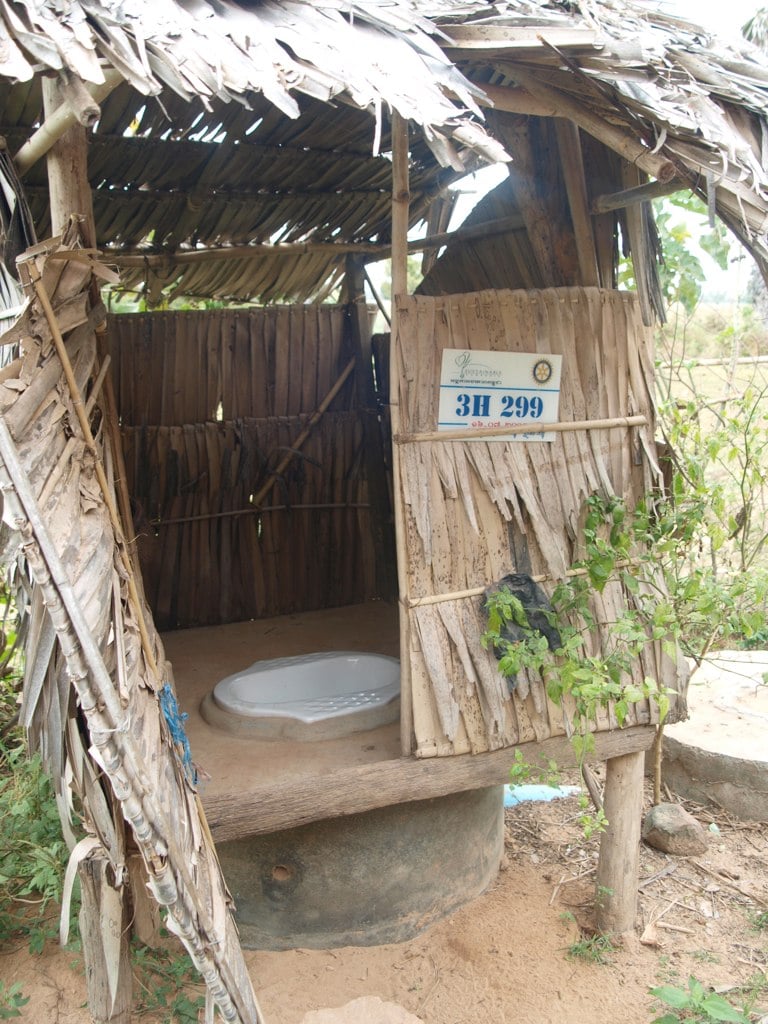 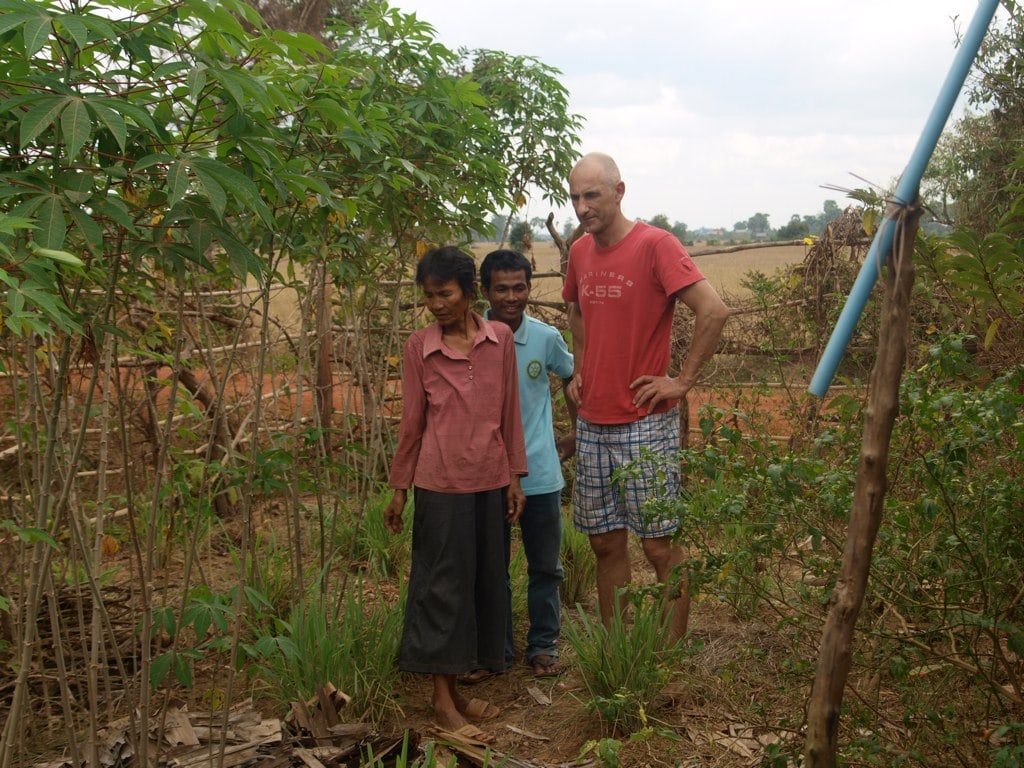 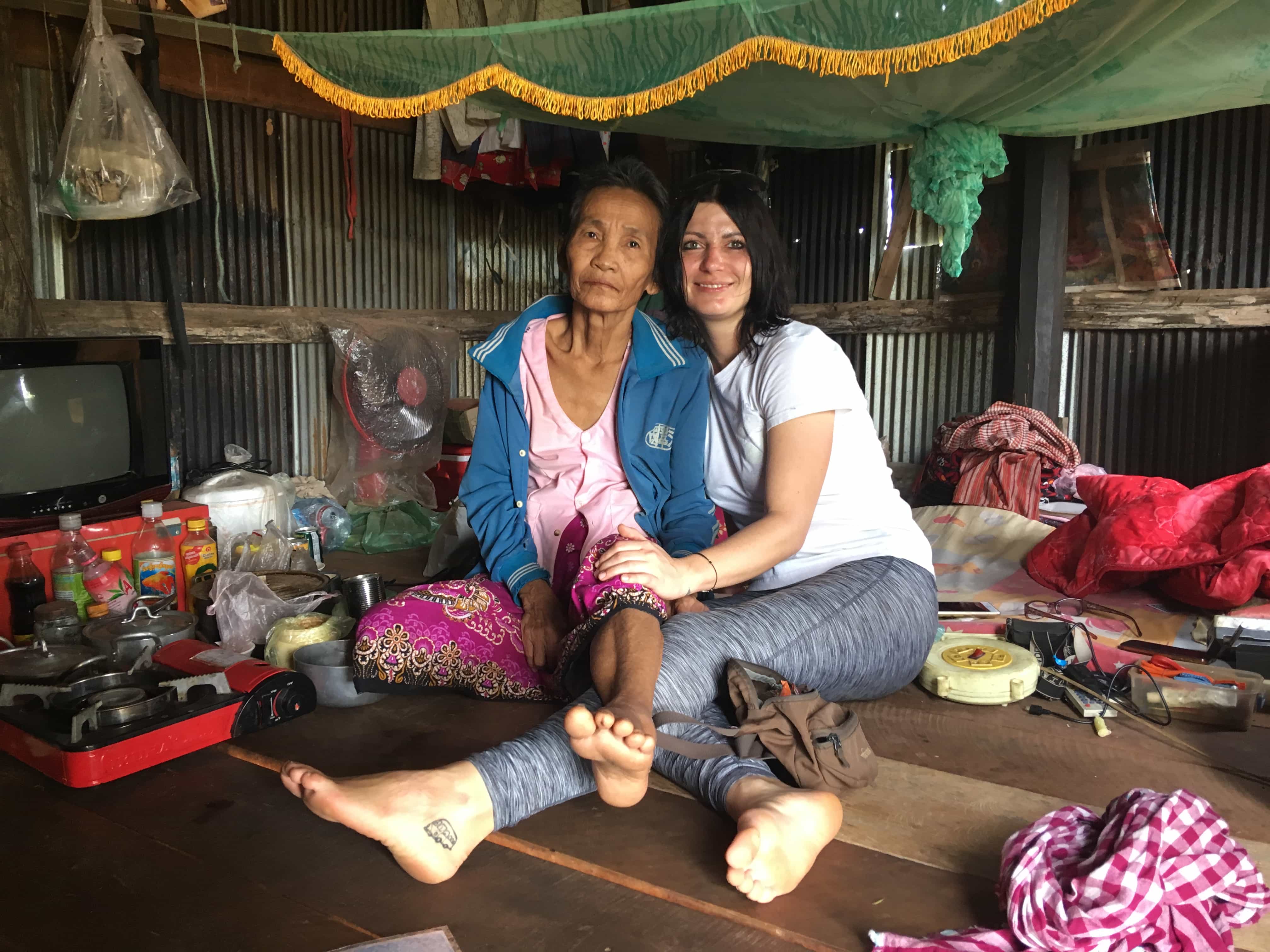 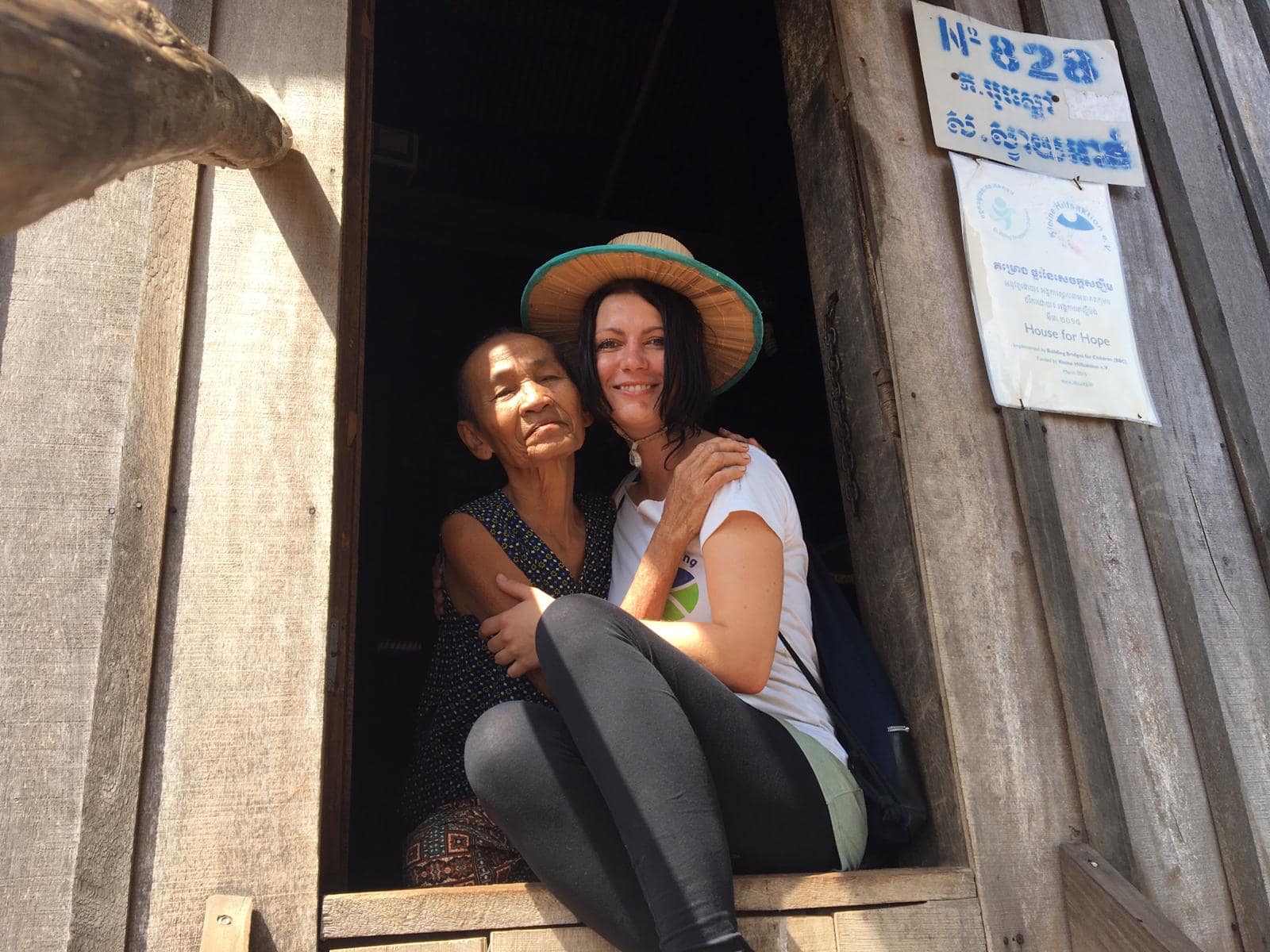