Kindergarten in Chy Hong I & II

In the village Chy Hong, in the district Banan / province Battambang, in Cambodia we have been building a kindergarten since March 2012. The citizens of Chy Hong should be able to send their small children to this kindergarten while they earn their living. The children will be accommodated in a safe and healthy environment, learn the Khmer alphabet and receive basic education. The kindergarten will be located where homeless families were settled in 2011.

Through the support of the association Kleine Hilfsaktion e.V. all 12 families have received a bio sand filter, 4000L rain water reservoir and form a self-help group (SHG). SHGs unite families who want to change their life situation together. Each SHG elects 3 representatives from its rows, who are responsible for the following tasks: Organisation of the SHG meetings, implementation of intensive training courses for the management of SHGs, training courses for the handling of money, savings and microcredit projects. These representatives are carefully trained so that they can manage their SHGs successfully in the long term.

All 12 families in the target region have joined together to form a SHG. In the new village of Chy Hong, the Kleine Hilfsaktion is concentrating its efforts on the sustainable improvement of the living conditions of families in difficult situations.

The planned construction of the kindergarten was 100% financed by our cooperating organisation Kinderhilfe-in-Kambodscha (link – click here) !

I: Overview of our Kindergarten Project

Due to the efforts of the Kleine Hilfsaktion e.V. and Bareebo, the village administration of Chy Hong provided a small strip of land for the construction of a kindergarten in January 2012. In the course of February 2012 the kleine Hilfsaktion e.V., Bareebo and the village administration met several times and as a result of the consultations they summarised the following overview of the implementation and continuation of the kindergarten project:

In the course of Bareebo’s constant efforts and the Kleine Hilfsaktion e.V. to ensure a sufficient supply of clean drinking water and to further spread meaningful technologies, our kindergarten receives one:

The RRH system consists of two rainwater cisterns with a capacity of 4000 litres. The rainwater flows from the metal roof of the kindergarten through sewage systems on the undersides of the rainwater gutters on both sides of the roof. Plastic pipes lead it to the top of the closed cisterns. Here it is stored until used by the children and caretakers. The rainwater is cleaned by a biosand filter system and serves as drinking water, for the toilets and the

BSF Bio Sand Filter Systems: BSFs use the ancient technique of natural filtration over sand and are designed for the size of a household. However, BSFs differ from the traditional sand filter method in that they contain a biological clarification stage. This has its own ecosystem of microorganisms and is designed to use water from a specific source. The microorganisms digest the pathogenic organisms present in the source. The parents’ council, parents and caretakers are instructed in the use of the system to ensure the desired results.

Toilets: The KG receives two outhouses, one for the girls and one for the boys. As already mentioned, there are currently exactly 0 toilets in the target region in the community of Chy Hong.

The Kleine Hilfsaktion e.V. and Bareebo will jointly address this issue in 2012 and help the 12 families in the target region to find toilets. The absence of toilets is an environmental problem and a high health risk. It is also degrading for people. The parents’ council, the parents and the children of the KG are taught how to use the toilets and apply basic hygiene measures.

A GHSt will be built with the participation of all groups. It will be located near the toilets and will give all users the opportunity to wash and dry their hands after use. The filtered cistern water will also be used here to ensure that the water is clean. The training for the GHSt project will be built into the toilet training.

As already mentioned, there is no electricity in Chy Hong. The KG receives a solar energy system. The energy will be used for the inside and outside lighting of the KG and for two fans. This gives the children a safe environment day and night and Bareebo an illuminated place for the necessary meetings and trainings, when the members of the Kleine Hilfsaktion SHG (self-help group) after work start their engagement for their community.

There will also be training for everyone in the use and maintenance of the solar energy system.

We would like to point out that the presented infrastructure, which will be available to the inhabitants of Chy Hong, can hardly be found in any kindergarten in rural Cambodia. The residents of Chy Hong will not only have access to these resources, they will also receive intensive training in how to use them. This will help them to develop themselves, their families and their community.

…to everyone here: Bareebo and the people in Chy Hong (Bong City). We would like to thank the implementer kleine Hilfsaktion e.V. and the main sponsor Kinderhilfe-in-Kambodscha e.V. very much for helping the people of Chy Hong and especially the children. They increase the quality of life decisively and ease the hard fate of these people.

Thanks to “Kinderhilfe-in-Kambodscha e.V.” from Jüchen and thanks to the decision of Jennifer Glindemann we were able to build a new kindergarten in our village Chy Hong II for the children of 58 previously homeless families. This was completed by the end of 2014.

We had planned to equip the kindergarten in Chy Hong II and the kindergarten in Chy Hong I, which opened 2 years ago, with as much meaningful and pedagogically valuable equipment as possible. Since Milda (our 5 year old daughter) was able to come to Cambodia for the first time, it was obvious that Milda and Kerstin would prepare their own project, tailored to the needs of the children. For this purpose we wrote to all 70 children (or their parents) in Milda’s kindergarten (St. Hubertus Kindergarten in Neuss) and asked them to see if they could do without some items in the children’s room. We attached particular importance to cuddly toys, Lego Duplo, coloured pencils, colouring books, puzzles and small light plastic cars and figures. Since the shipping is very expensive, we have also attached a postage box to the collection box, into which the parents could throw a few euros postage money.

Already after one week we sent two packages with a total of 51.5 kg of toys.

When Kerstin and Milda arrived in Cambodia, the things were first distributed to the two kindergartens and the use and educational background of the various games were discussed with the kindergarten teachers. Then came the big moment for Milda and the children. Since Milda is very light-skinned, has blue eyes and no black hair, she was the absolutely exotic centre of attention, and not only for the children. When she opened the box with the toys together with Kerstin, the enthusiasm of the children could not be stopped. Every child in Milda’s kindergarten had painted a picture for the “poor children” in Cambodia. In return, we asked the children here to paint a picture for each of the children in Germany. For both sides we consider it to be pedagogically very sensible to deal with the other situation, especially for the children in Germany. Immediately the children set to work with their new pencils.

This project showed so many positive aspects on both sides that we decided to expand it accordingly. Unfortunately, there are still too few kindergartens in Cambodia to have a corresponding relationship. With an average age of 21 years (in an aging Germany it is … years) there is a corresponding need in every village. But we also want to extend the programme to primary schools. Here in Cambodia we have equipped the eighth school with toilets, hand washing stations, organic sand filters and a 40,000 litre rainwater collection system that guarantees hygiene and drinking water for around 1,350 children. A nice target group for age-appropriate and senseless double equipment in our children’s rooms. A big advantage of the project lies on the side of the German children. For the first time they are mostly concerned with the fact that the vast majority of the children in this world are far worse off than they are. In our affluent society, this pedagogical approach is extremely necessary and otherwise rarely taken into account in the curricula.

Conclusion: Here in the 3rd world the things help countless children and the teachers to lead the children out of the vicious circle of (educational) poverty. For us the project helps the children to understand the world and their own good position and to develop a social commitment.

The kindergarten in Chy Hong I was built for children of the village. Children from the surrounding area also have the opportunity to participate in the kindergarten program. Currently, up to 13 children between the ages of three and five attend the kindergarten. Four children are directly from Chy Hong I, the other seven are from the surrounding area. By looking after the children in the morning, the children are optimally prepared for school and the parents are given the opportunity to pursue their professional activities without worries. Without this possibility, most children would stay unattended at home the whole day.

Yon Sanin takes over the management of the kindergarten and the care of the children. Yon Sanin is 32 years old and lives in Banan. In the afternoon she gives extra lessons near her home.

For the kindergarten, Yon Sanin wishes that

Chy Hong II gives 56 previously homeless families the chance at a home again. It is therefore all the more important that the children are looked after during the day so that the parents can take care of themselves.

The kindergarten is open from Monday to Friday (07:00 to 10:00). Currently, up to 13 children between the ages of three and five attend the kindergarten.

Vuthy Sophuong is 28 years old. Insufficient financial meant that she quit school in 2010. She earned her living as a hairdresser until she finally got a job in the kindergarten of Chy Hong II in 2015. Since then she has looked after and taught the children in the morning. From her own experience she knows how important education is to break out of the vicious circle of educational poverty.

She teaches the Khmer alphabet and its numbers in a playful way, promotes creativity and manual dexterity. They tell stories together and sing songs, whereby Vuthy Sophuong always pays attention to good manners.

For the kindergarten she wishes: 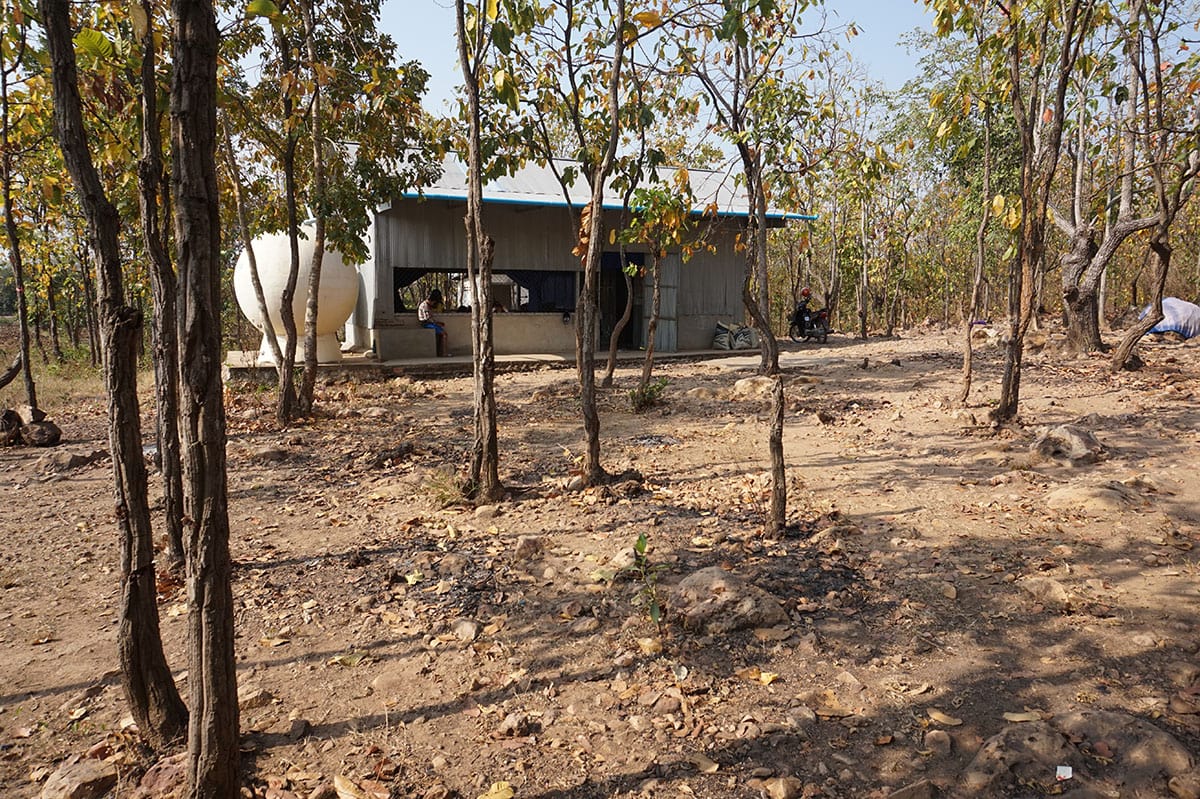 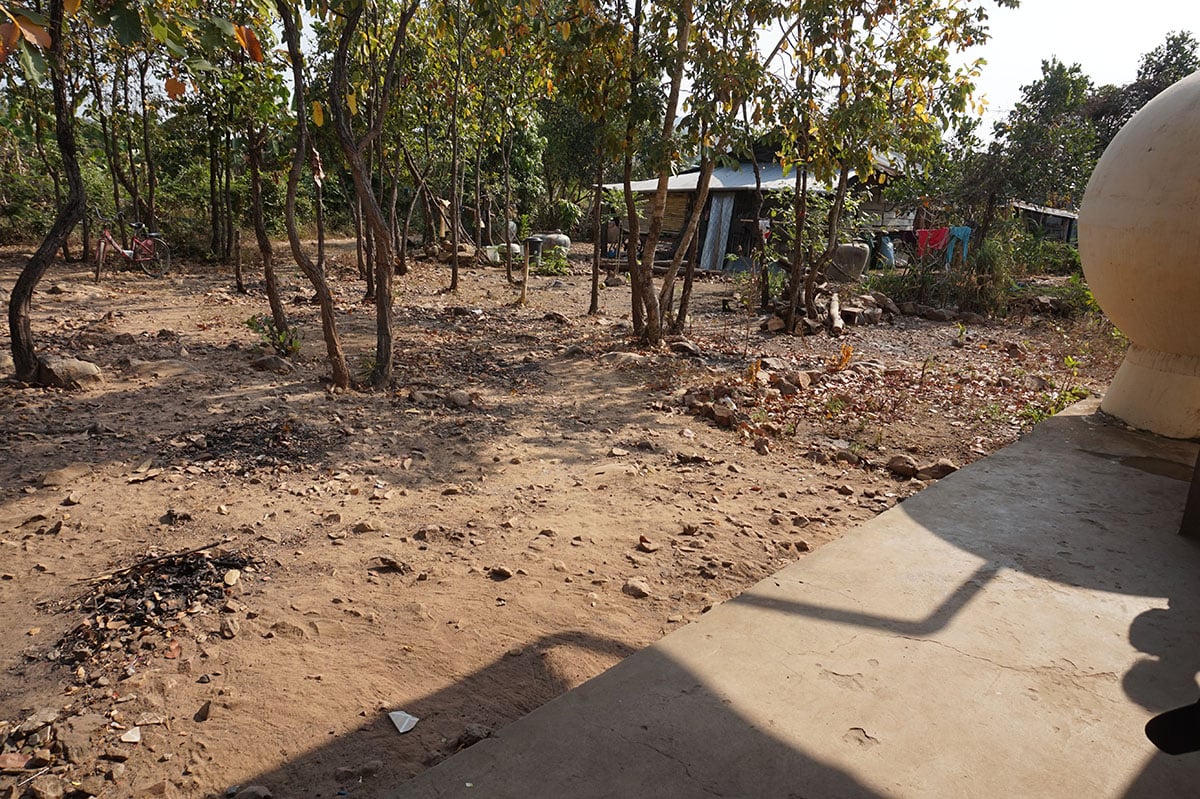 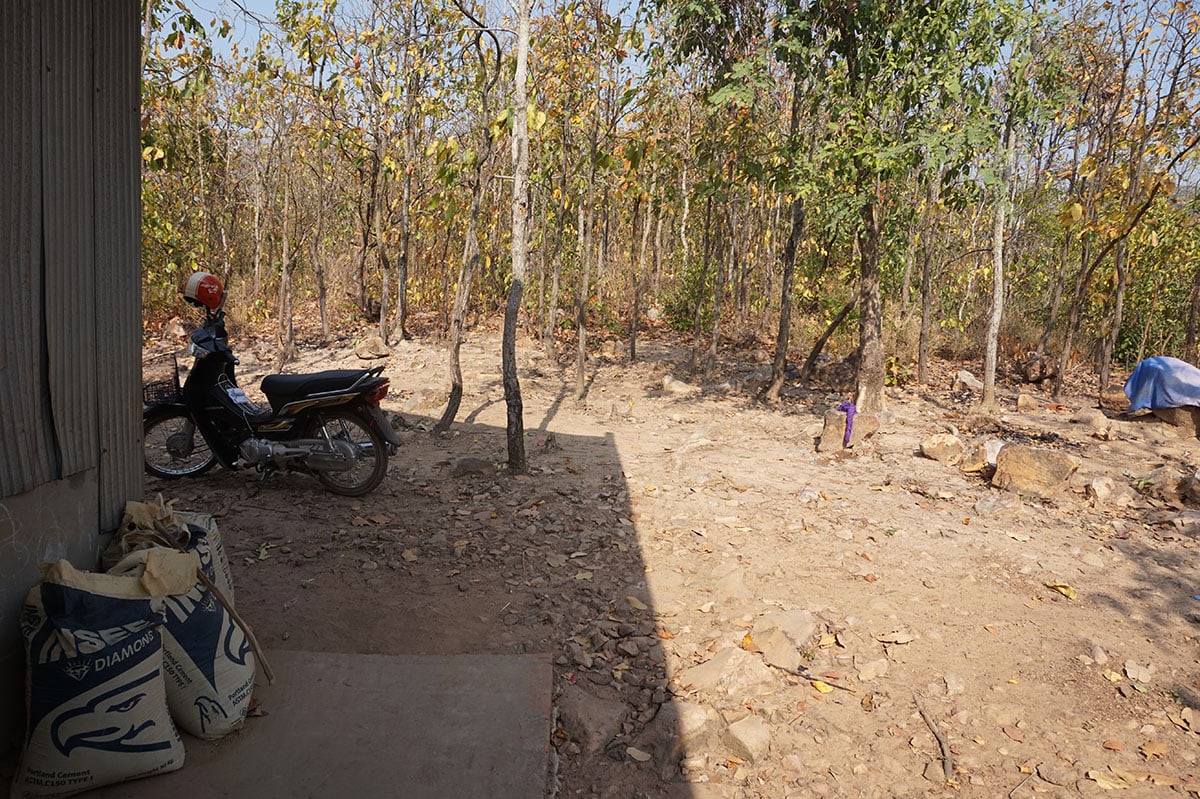 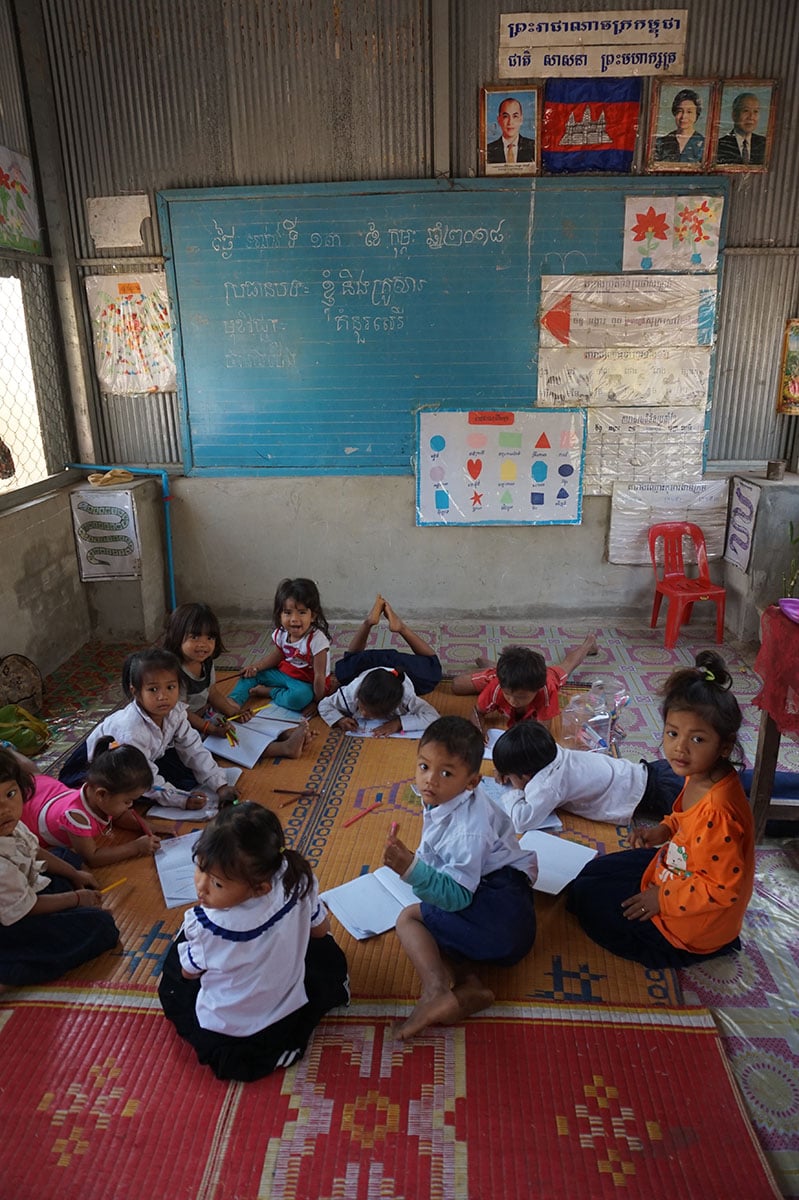 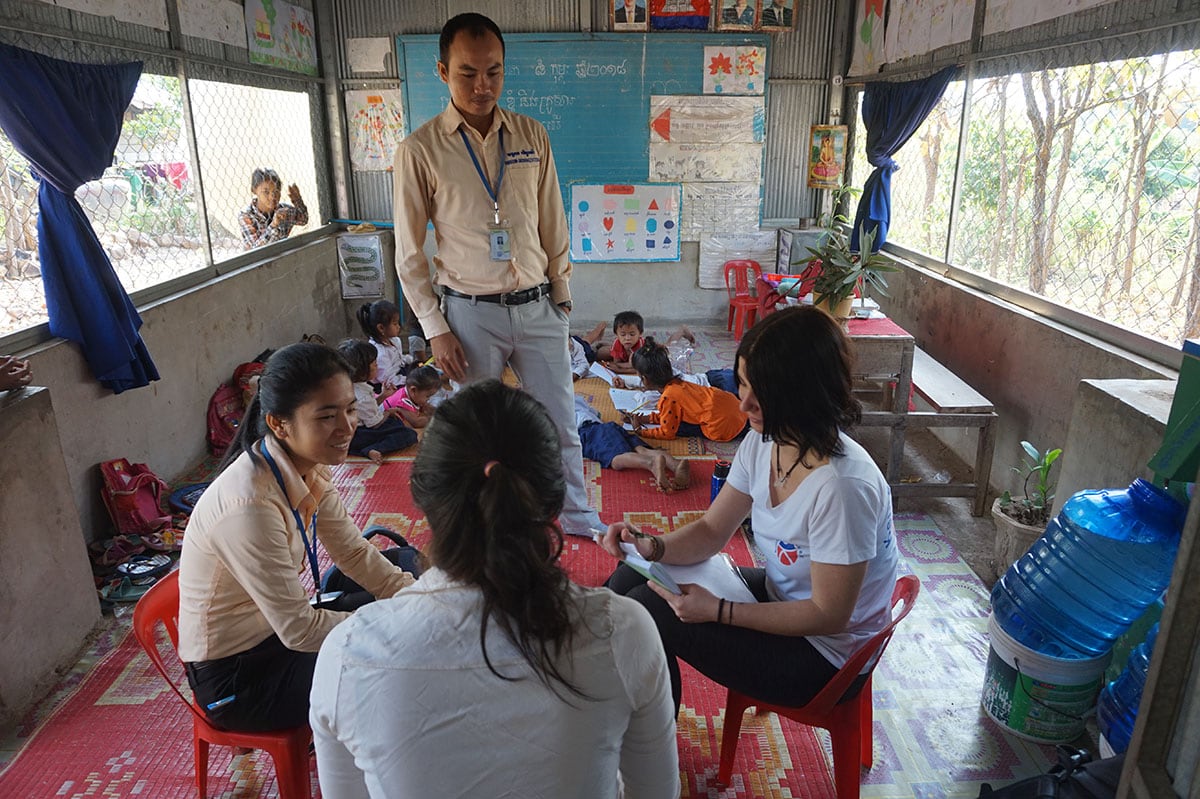 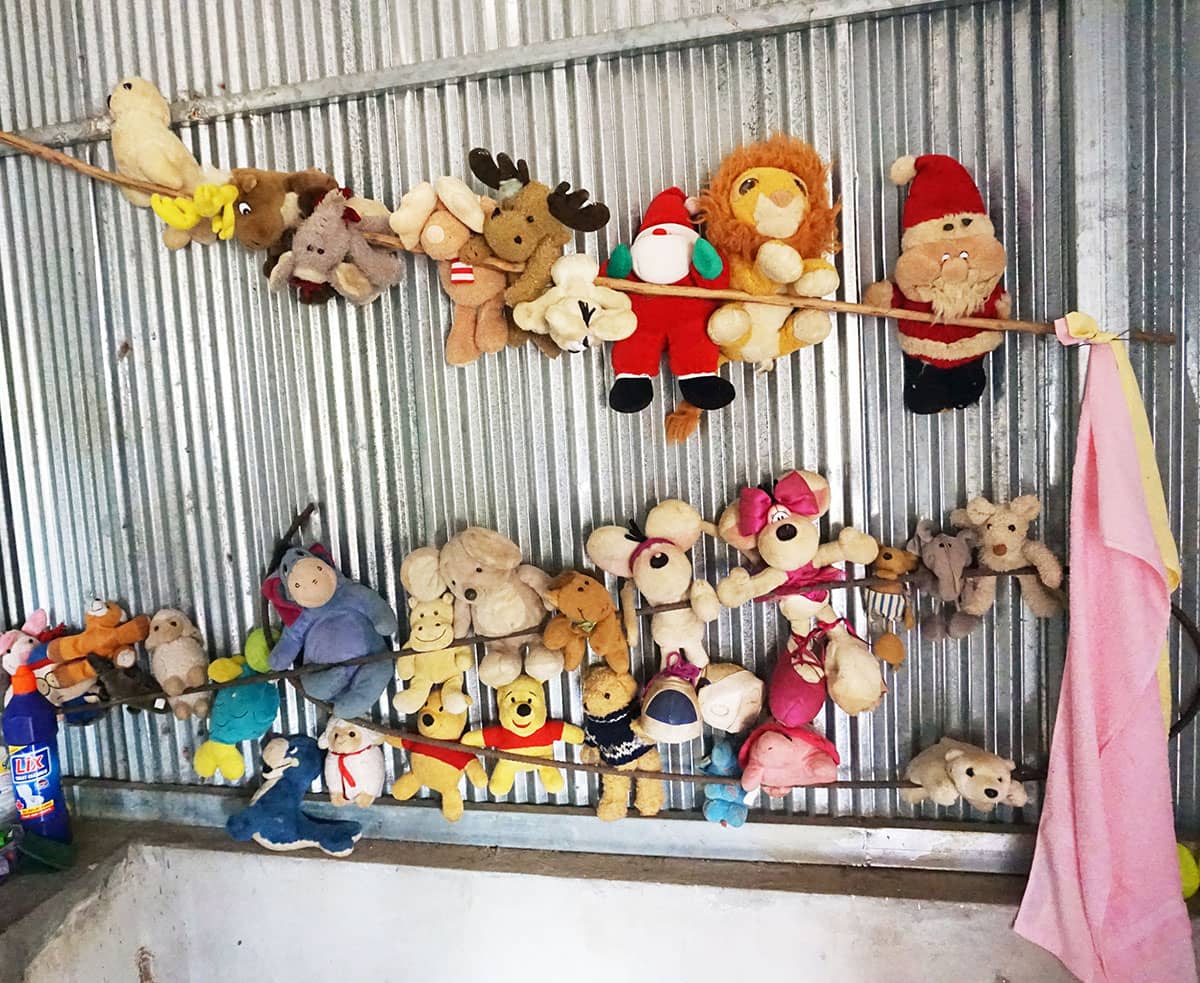 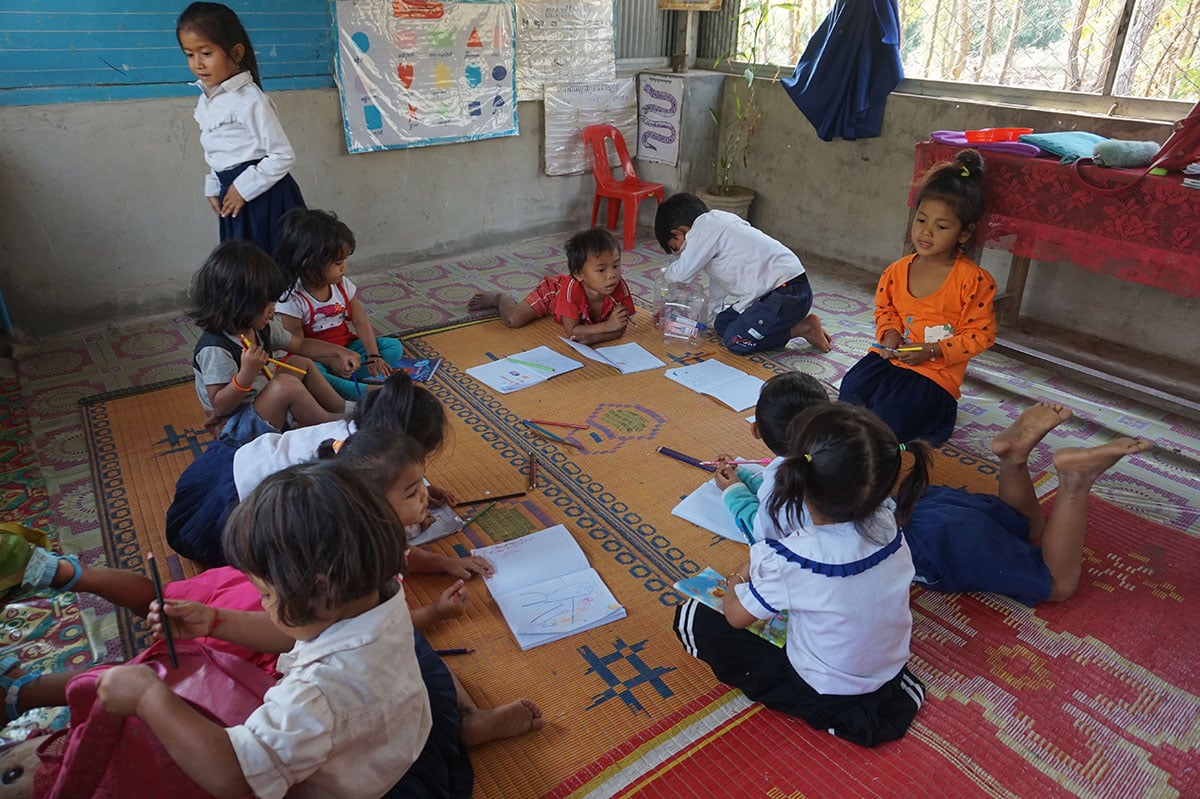 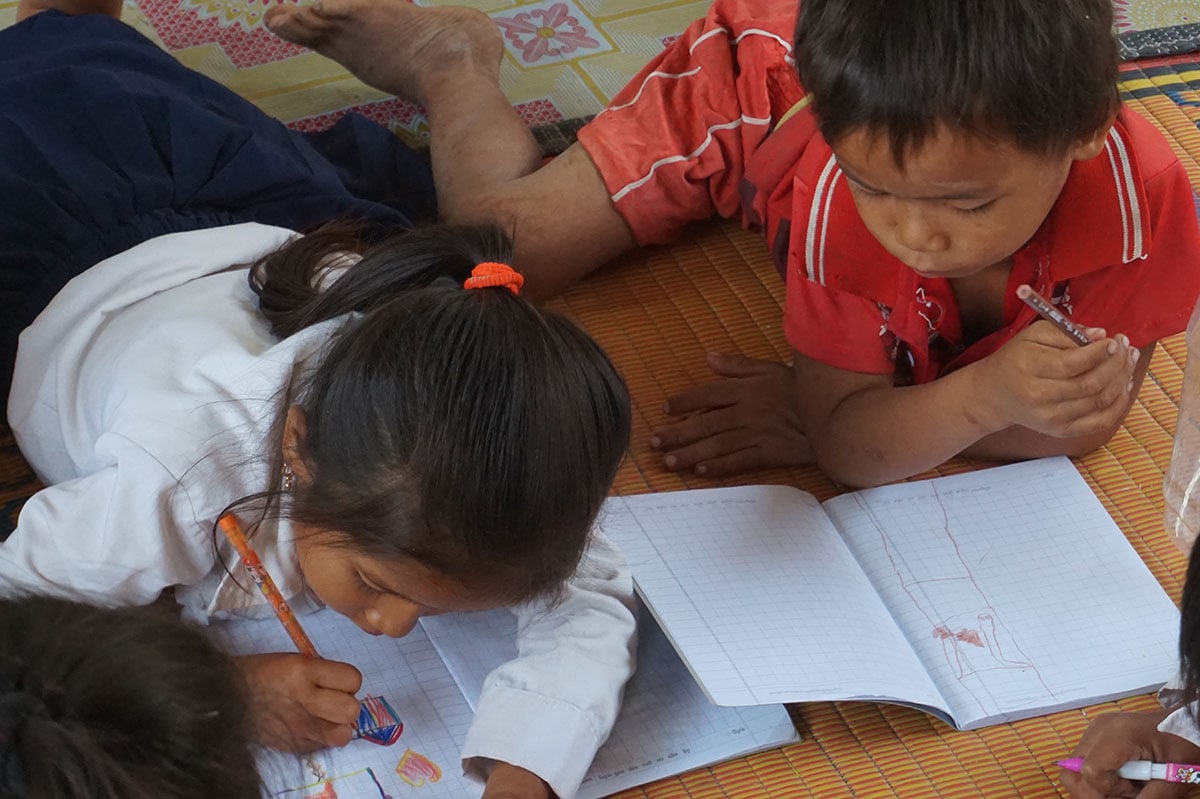 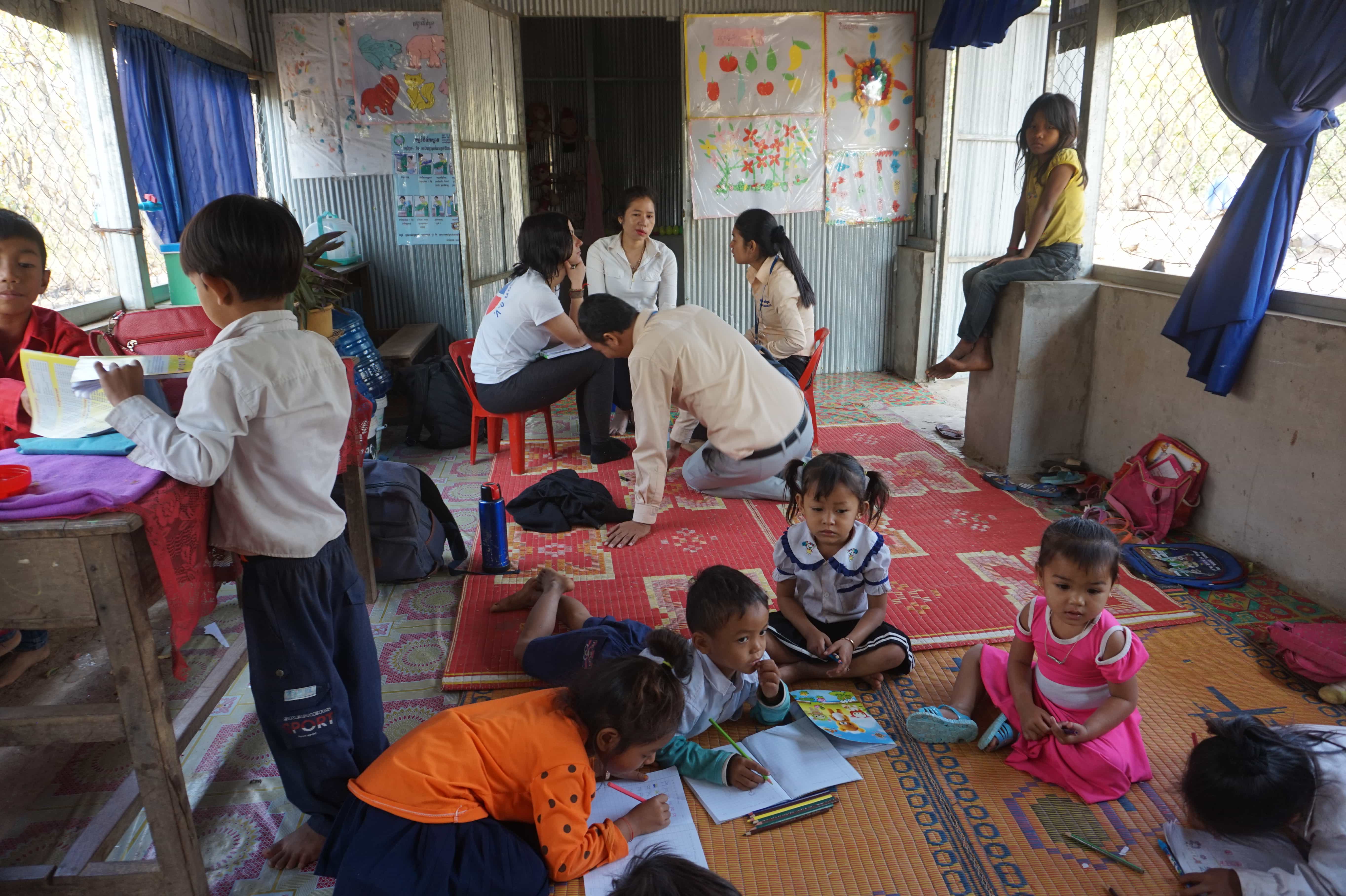 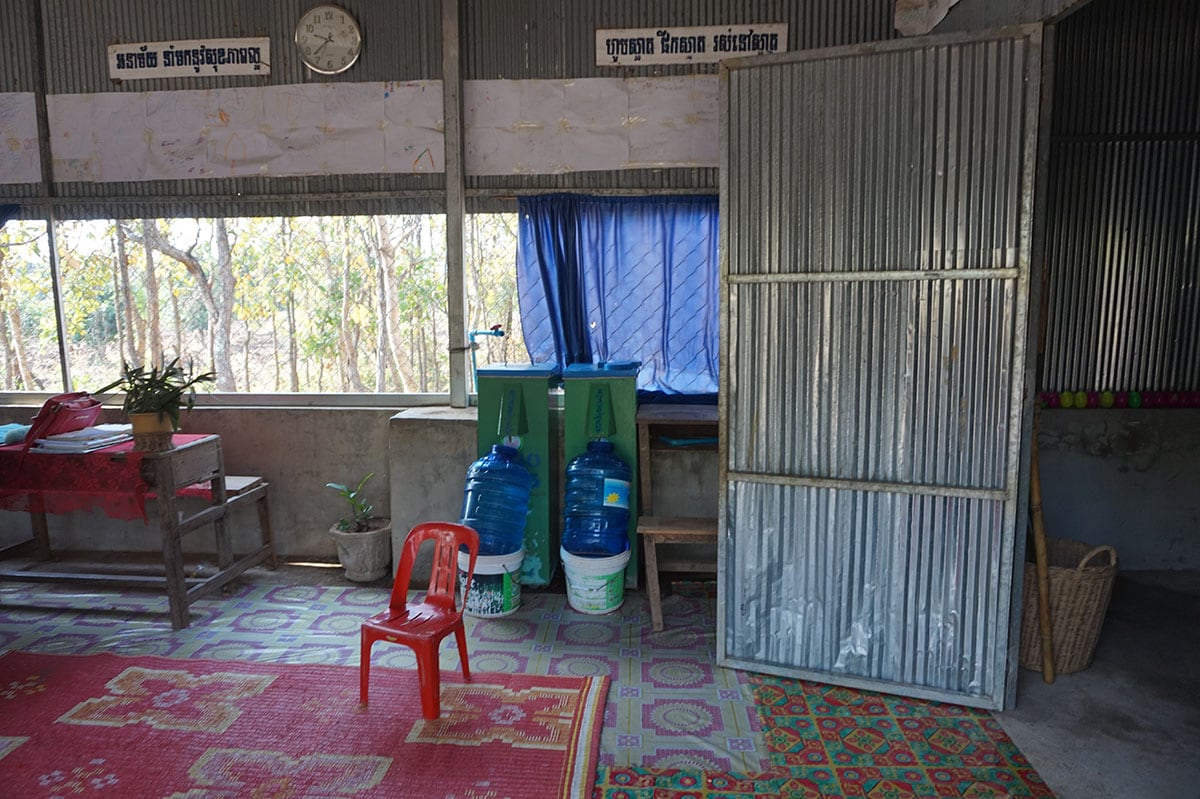 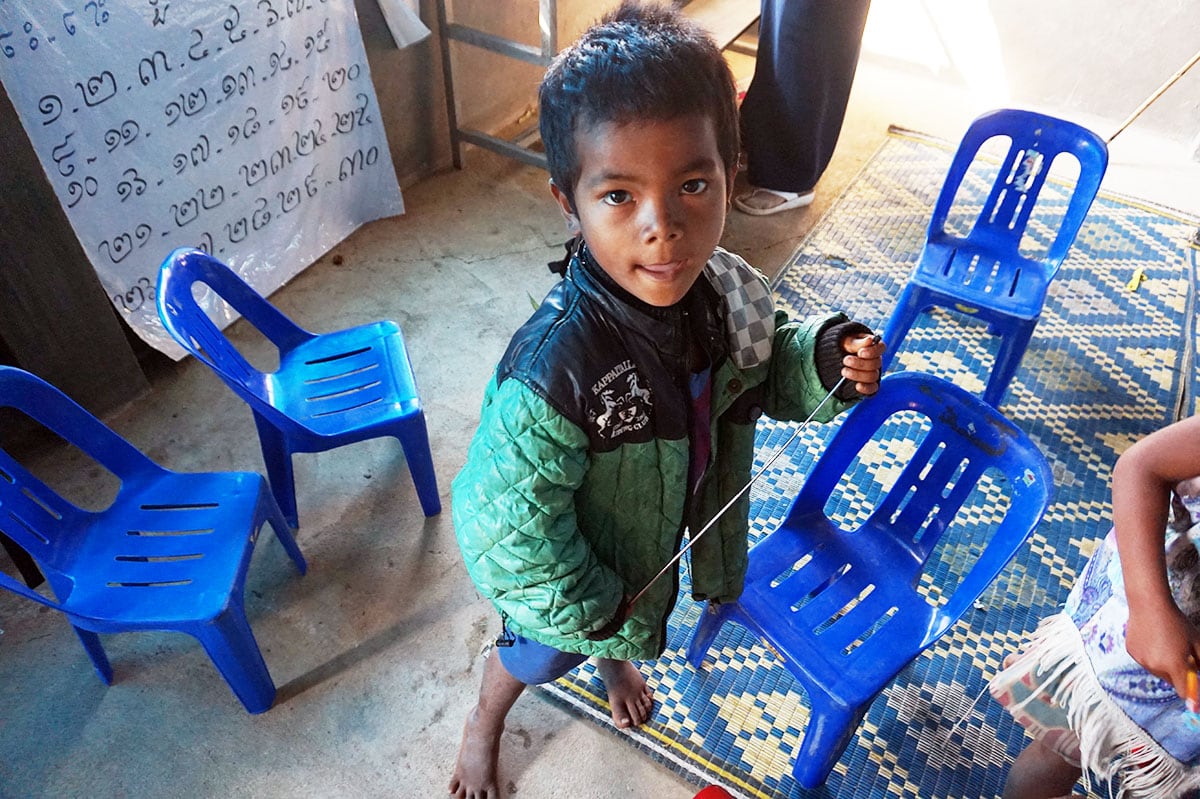 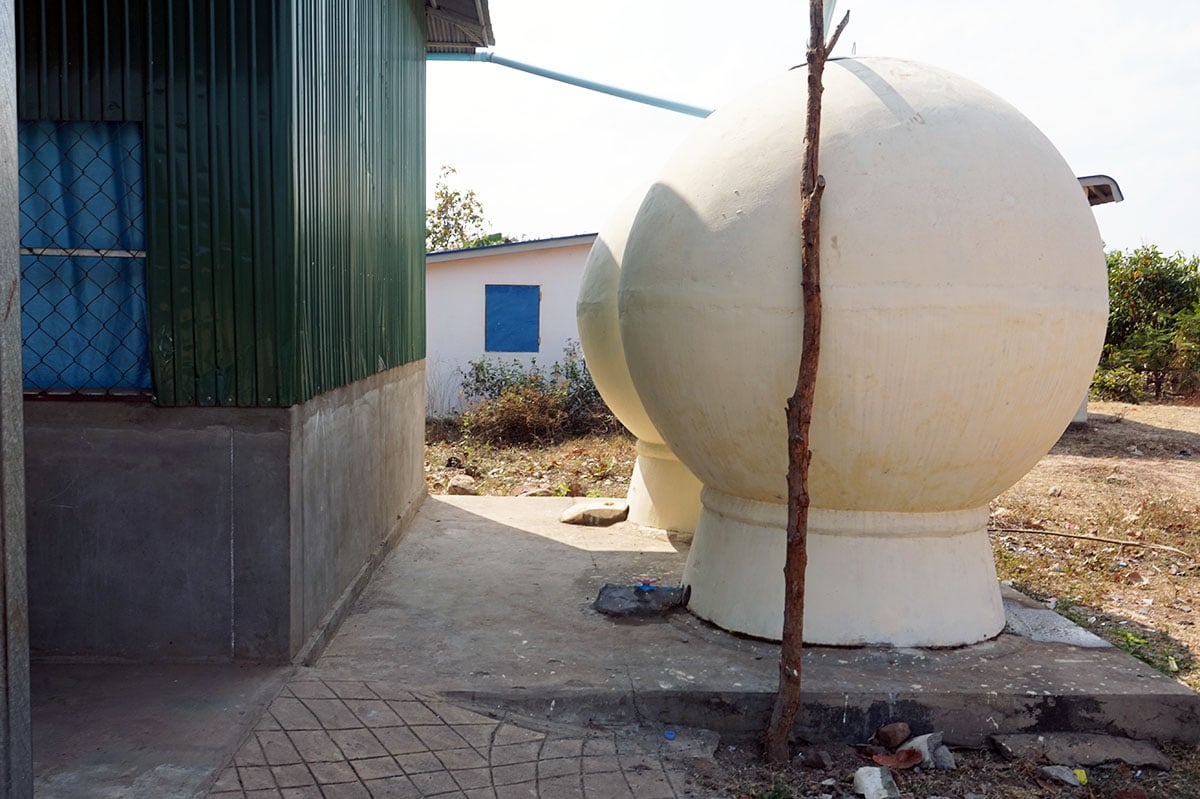 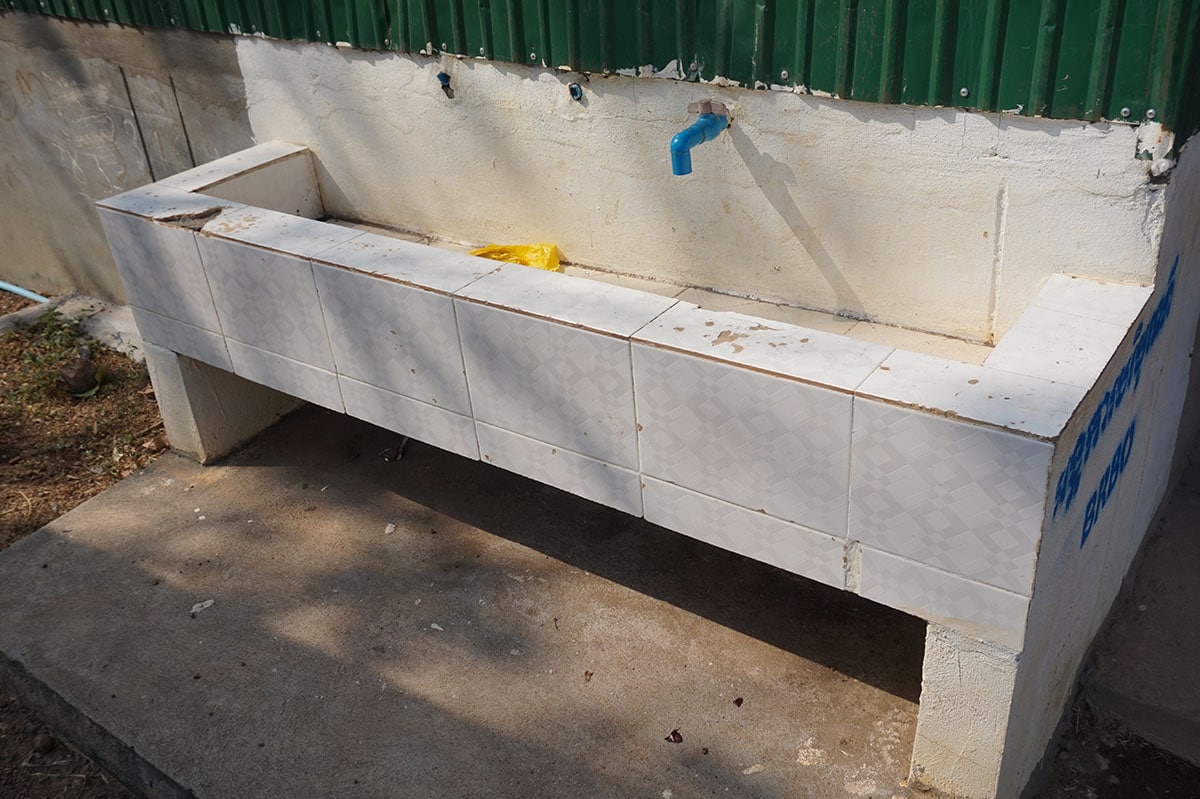 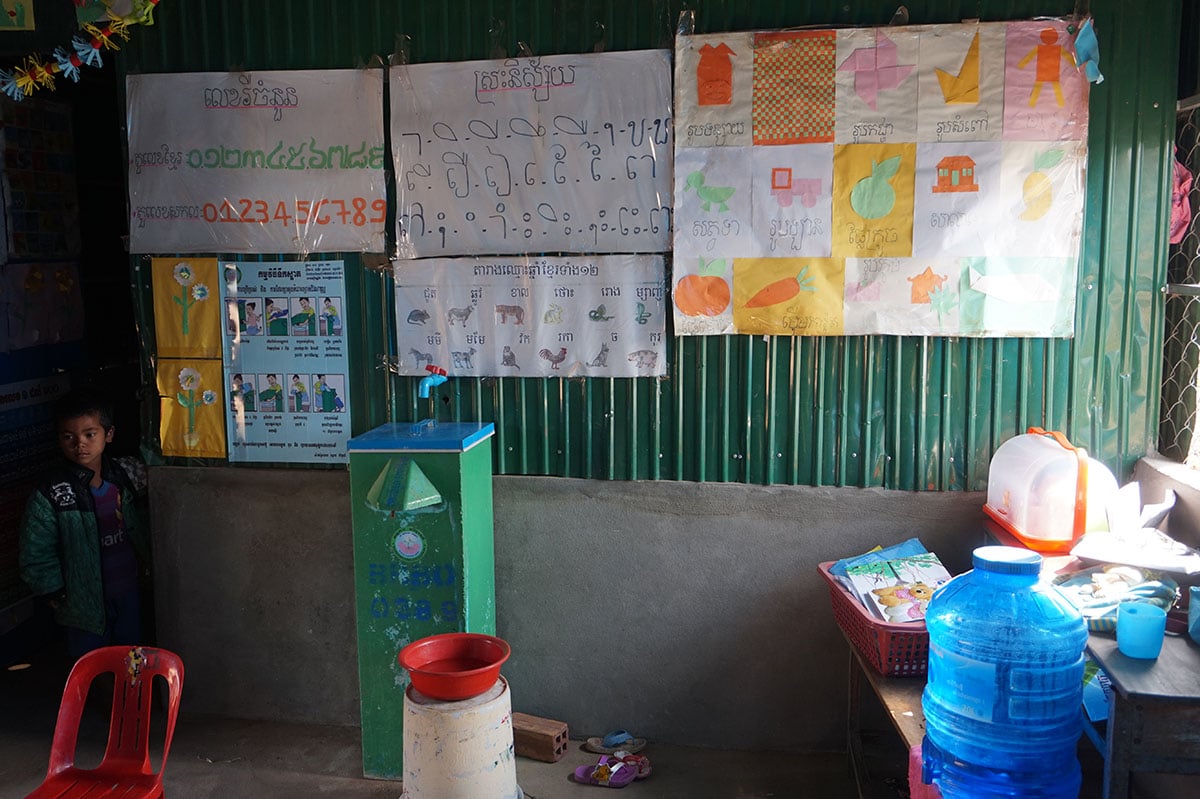 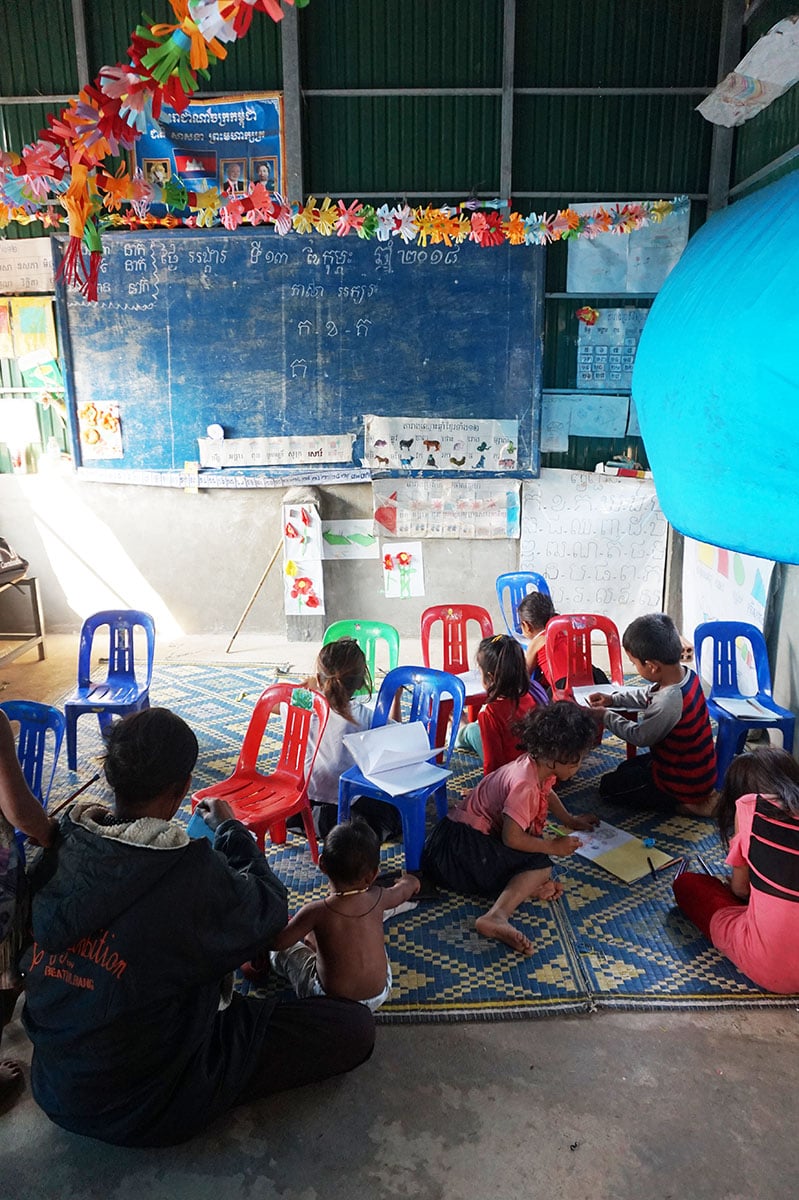 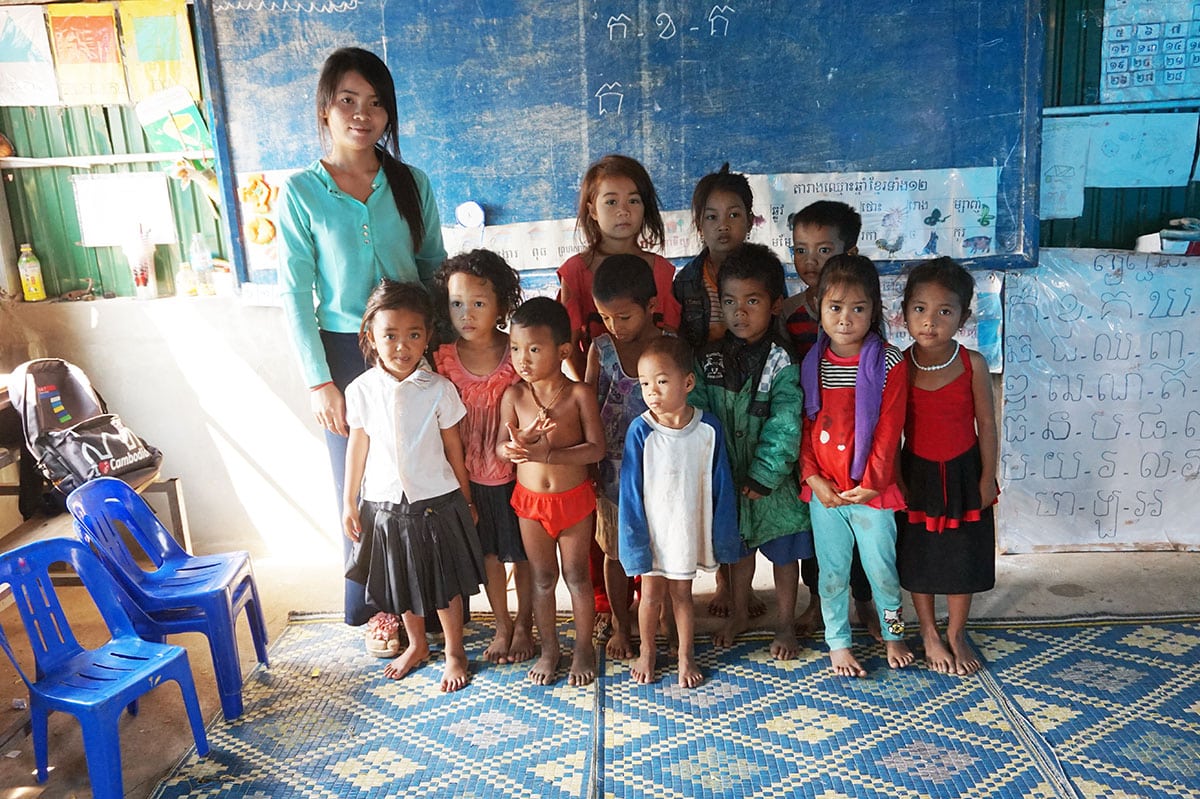 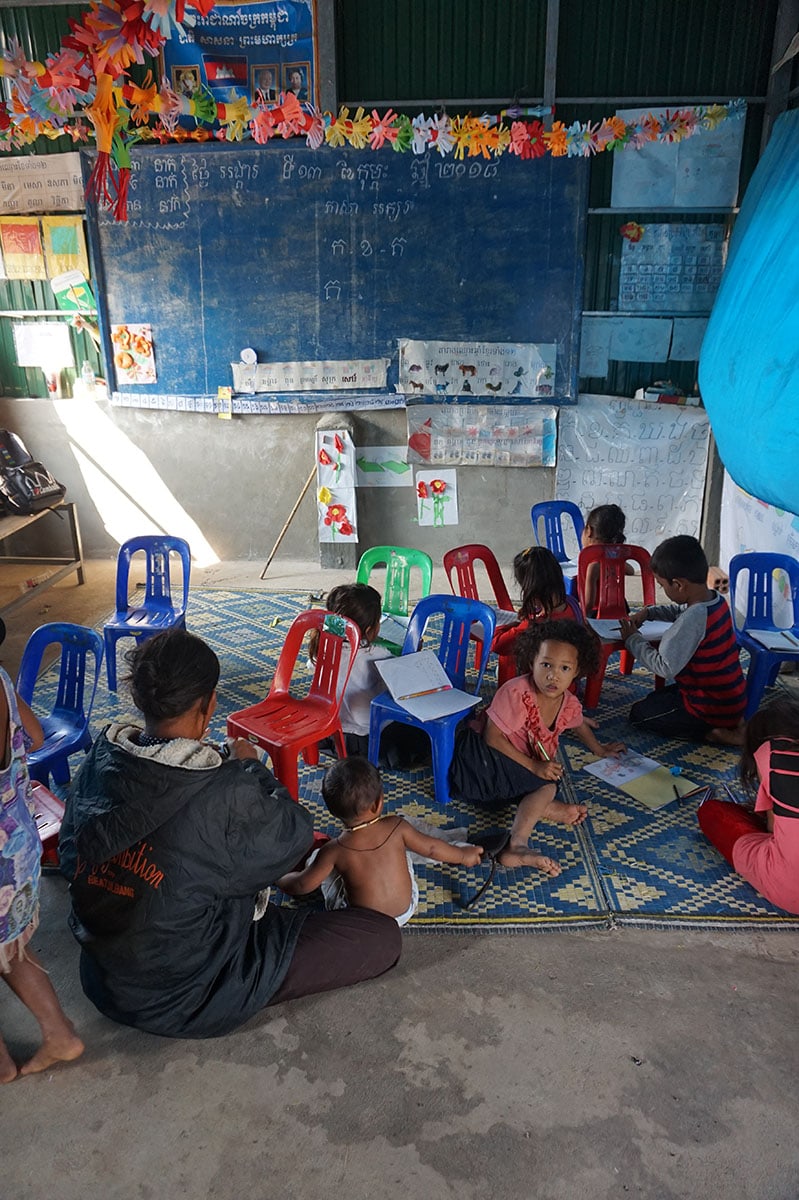 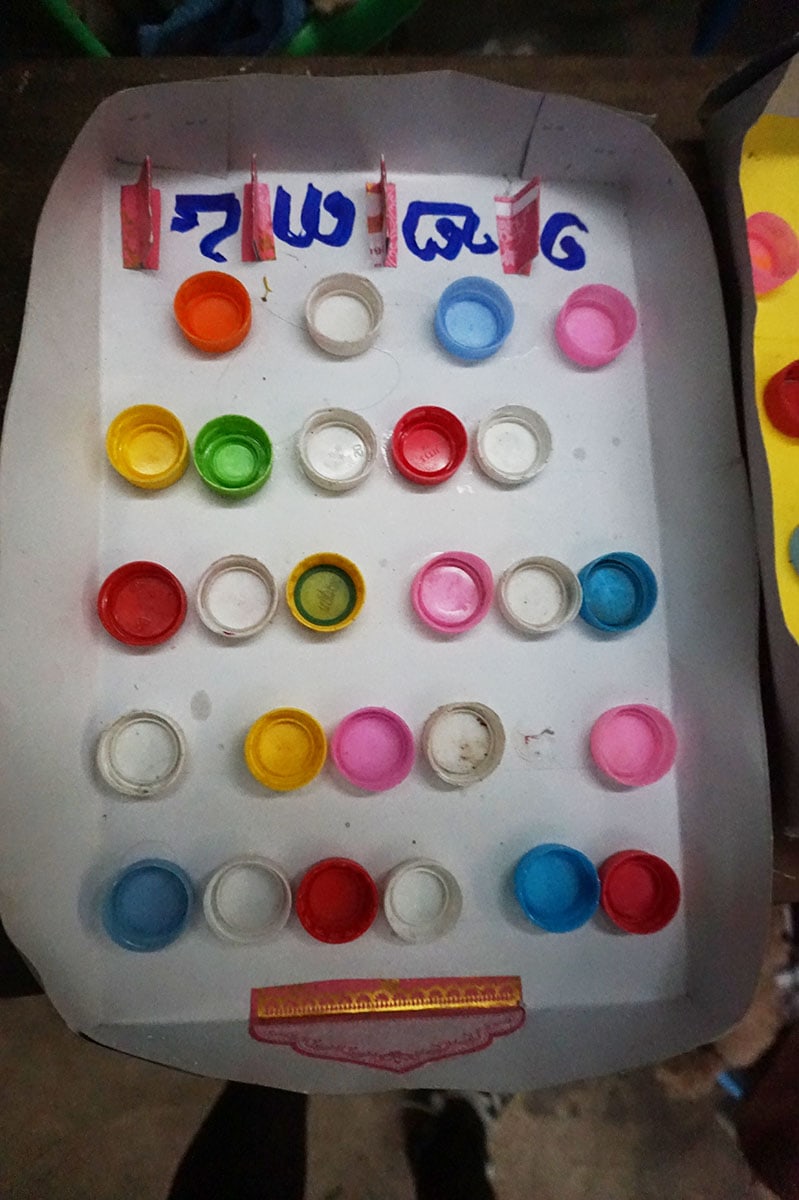 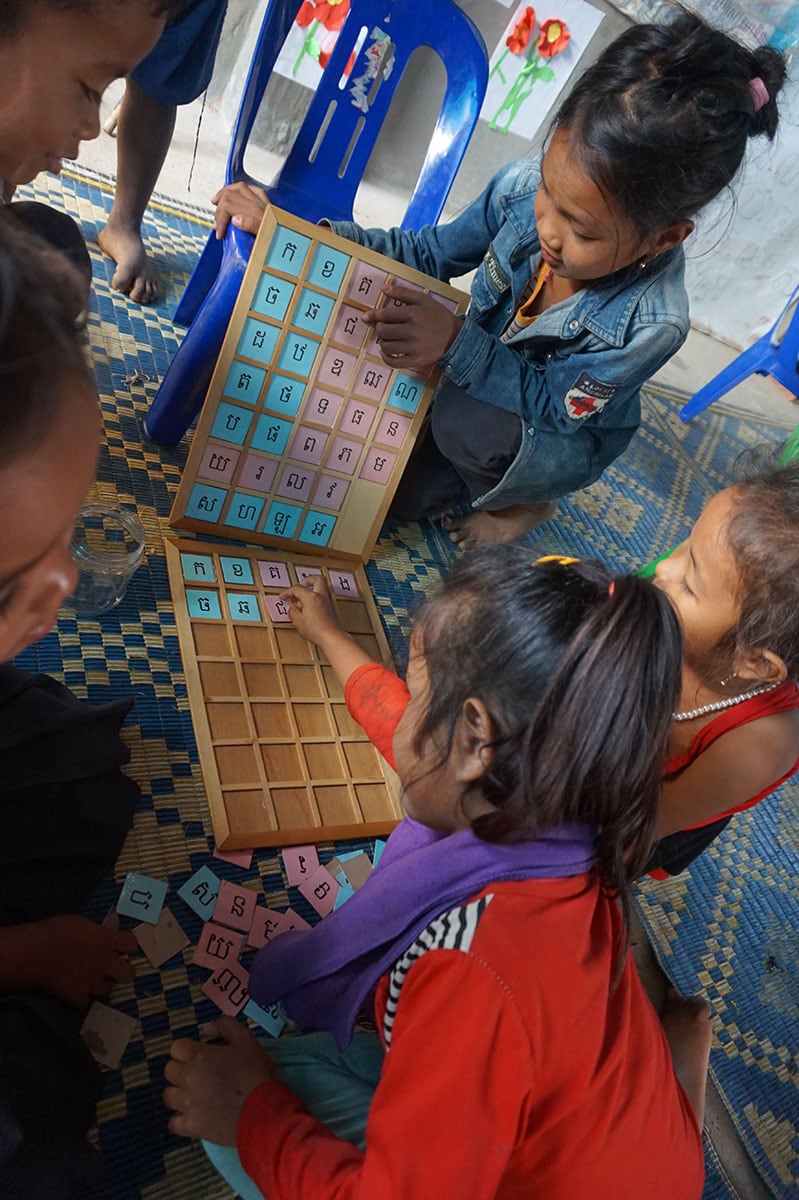 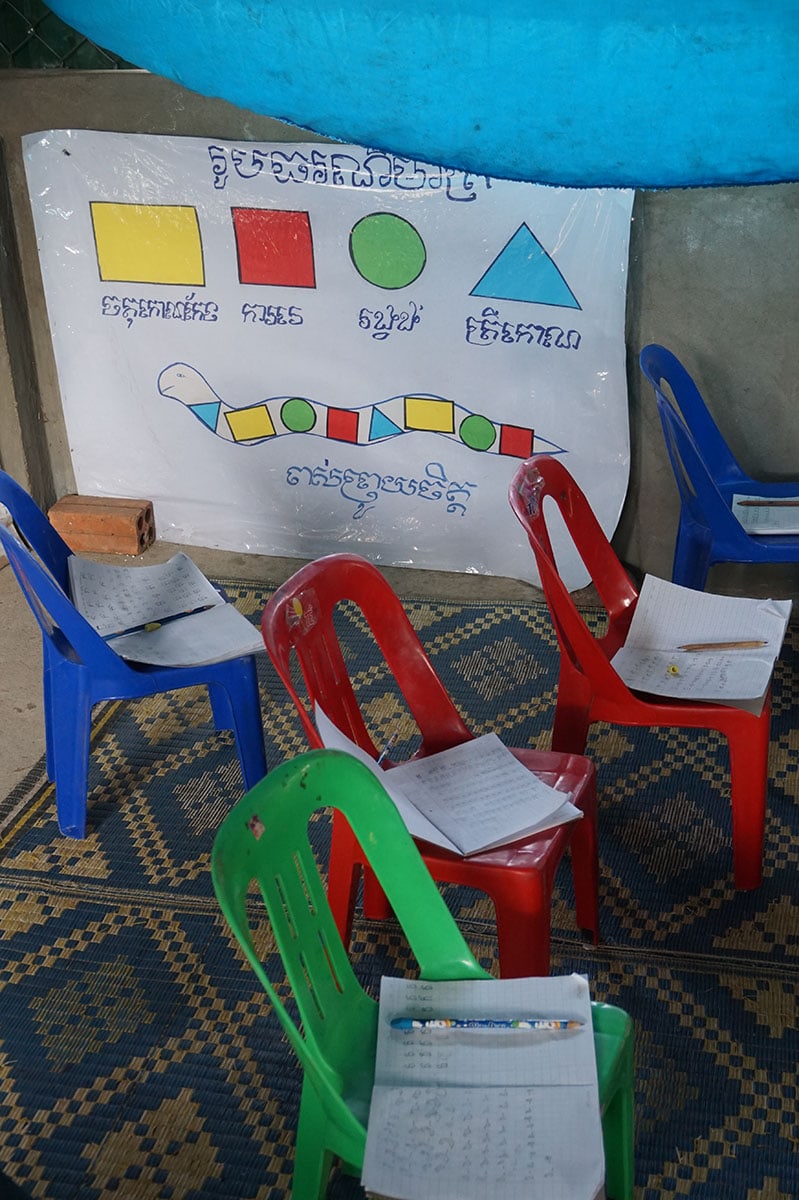 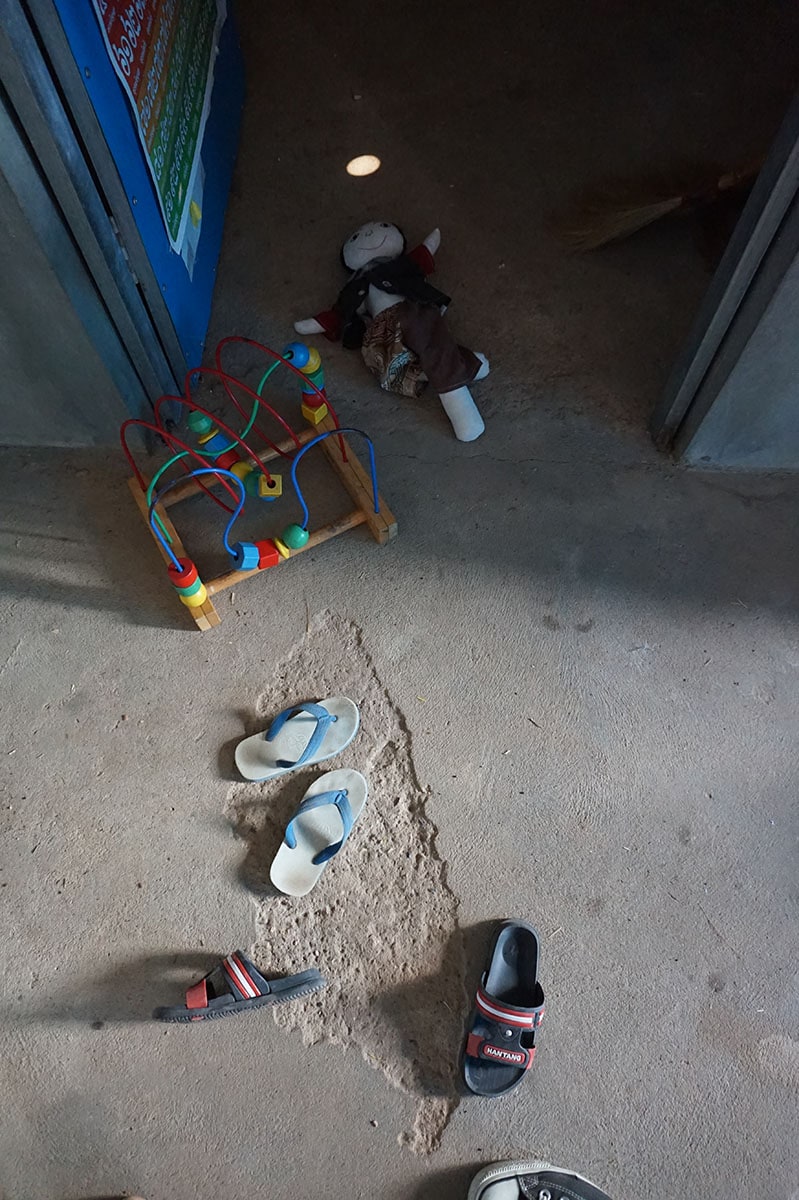